Tayler and Ally Tied at Top of Junior Rider Series 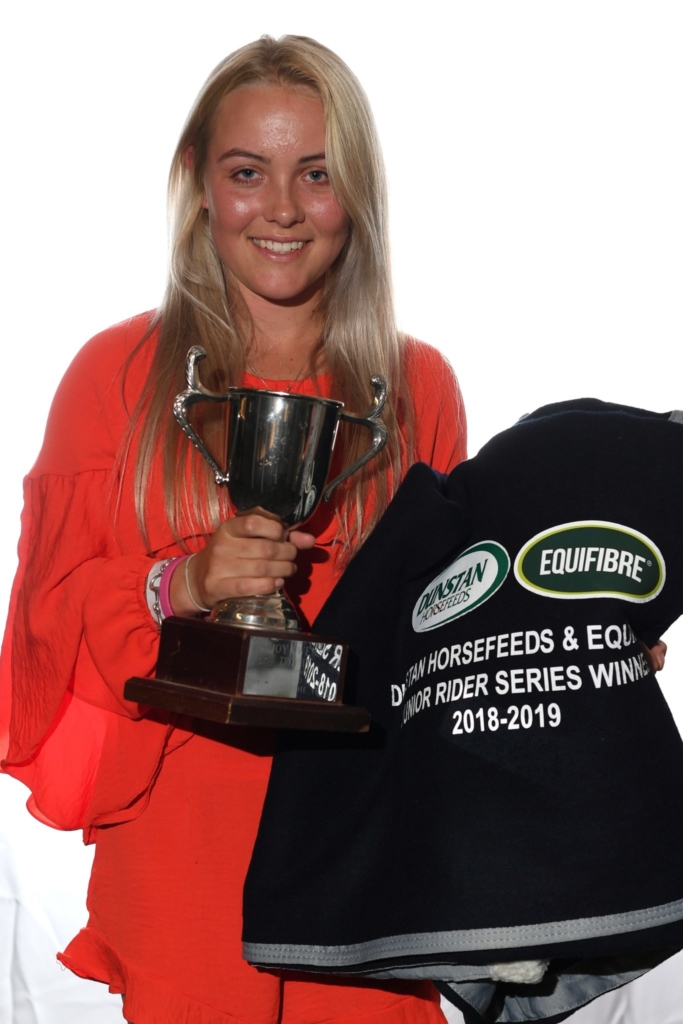 After a whole season of competition, you’d think it would be easy to find a single winner but in fact, it’s a tie at the top of the Dunstan Horsefeeds and Equifibre Junior Rider Series between Ally Carson (Putaruru) and Tayler Nalder (North Canterbury).

Both young women are in their final year of junior rider and were ecstatic to win – even jointly. It was somewhat emotional for 17-year-old Tayler who gives her ride aboard the gorgeous Icebreaker II to her younger sister Anna.

The family bought the big grey in 2014 for dad Mark to hunt on. At that stage, Mark was not a rider – he’s currently deputy master of the Brackenfield Hunt and next week they will lead them out.

Early on though Tayler had eyed the horse and convinced mum Pam to let her ride him. She did a little show hunter, winning the junior rider series in their first season and quickly made the decision to move to showjumping. They’ve never looked back.

In the grand final they had to settle for fourth after a frustrating rail in the jump-off. “I was really annoyed with it,” says Taylor, who is trained by Jeff McVean and Kati Meredith. “The wet ground got to him and this height really is his limit . . . but he always gives his best.”

She was chuffed to win the series in their last season together. “I didn’t really think we would be able to do it. At the beginning we didn’t have a very good run,” says Tayler of her early season in Junior Riders with 14-year-old Icebreaker. “Then we started doing well and the points started adding up . . . and here we are.”

Eighteen-year-old Ally and her nine-year-old Whiorau Ritchie have only been together a year-and-a-half. They had a rail in the opening round but had enough speed to take sixth place in the class.

“He’s such a happy horse to have around,” she said. “He loves people and food and other horses . . . and he really loves to jump and tries so hard for me.”

While she had focussed on the Junior Rider class, it was more about just doing their best each outing and whatever happened would be a bonus. She admitted to feeling the pressure coming to the final at the top of the leaderboard but soon put that aside. “I figured I was second after that rail, and I was happy with that, so it is awesome to be first equal.”

She’s hoping Ritchie will now step up to Young Riders next season. Ally, who is trained by Duncan McFarlane and Helen McNaught, is already enjoying success at the higher level with Letano. “It is good to see where I am at in terms of competition. For me it is about stepping up, consolidating and then stepping up again.”

Ally just recently moved to Hunterville to work on a dry stock farm with Daniel and Chrissy Webb.

In the Dunstan Horsefeeds and Equifibre Junior Rider Series Final, just five of the 16 starters went clear in the first round with all of them picking up four faults in the jump-off. But the day belonged to rising young star Tim Wilson (Waipukurau) who comes from rather blue blood of New Zealand showjumping thanks to his Olympic Cup winning parents Claire and Simon.

Riding his mum’s lovely mare McMillans Tipsey he was the fastest of the field to take a very popular win. He looked on track to notch a double clear, only to have the last hit the turf. Olivia Dalton (Karaka) and Appleton recovered from a very specular annihilation of the wall – the first obstacle in the jump-off – to scramble back up with Olivia somehow reclaiming a stirrup and ride to a gutsy second place, with Meg Rogers (Palmerston North) and Late Lunch coming in for third. Caitlin Adams (Christchurch) and Hammertime won the equitation.