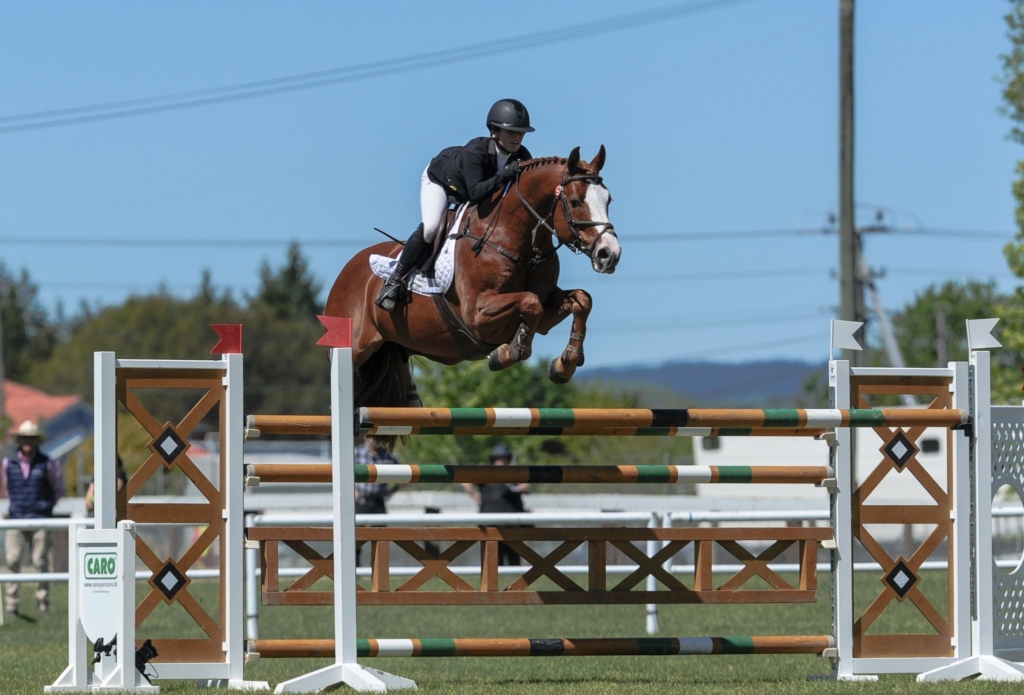 Christchurch rider Steffi Whittaker is still coming to grips with losing her superstar chestnut Eros K but draws some solace that his efforts will be celebrated with back to back wins in the EquiBreed Leading New Zealand Jumping Stallion Series.

The Irish import died in mid-March after getting a major infection that proved resistant to medication.

“He was just so gorgeous,” says 19-year-old Steffi, “and so handsome to look at with his glowing blaze and amazing tail. He suited me down to the ground and probably the easiest horse I have ever had. Everything about him was so straight forward. He was just perfect – he had the temperament, scope, heart and such a caring soul. He was so loveable. Everything about him was perfect to me.”

The pint sized pocket rocket and Eros were together just two seasons. “I jumped the biggest I had ever jumped when I tried him and it was so easy. I couldn’t believe it.” He took her from young riders to World Cup, where they placed fifth in their first-ever qualifier. “We just matched straight away and he would do whatever you asked him to. He was a true professional.”

She was over the moon when they won the top stallion award in 2017-2018, their first season together. “That was so exciting, then this year he was so consistent. We were just starting to nail the double clears.”

The horse was loved by everyone at the Whittaker stable. “He was so easy to love and at a show he could stand in a line-up between mares without a problem. At home he would like to tell everyone he was the boss and particularly when we would unload him after being away at a show.”

Steffi worked hard to keep him fit and fresh with lots of variation in his training but one of his favourites was a good canter on the track. “He would neigh out and then just get into it,” she says, adding that he loved nothing more than a sneaky little snuggle and cuddle.

“He was the best team mate and the love of my life. He was my one in a million stallion.”

The stallion – by Guidam, out of Duchesse de la Bryere (by Cavalier – was bred by Knightfield Stud in Ireland and imported as a youngster by Josh Barker who competed him at World Cup level in 2015-2016.) It was Ross Smith who suggested Eros as a ride for Steffi.

The Whittaker family have a racing stable in Canterbury and are well used to colts but were hesitant to have a stallion at home. That all changed very quickly when they saw how easy he was to handle.

“He was amazing to take to shows and he really did teach Steffi how to manage a stallion,” says mum Trace. “She’s been brought up around the racing environment so always great around horses and has no fear.”

They had planned to make him more available for breeding in the coming seasons. “He had such an amazing temperament and really was the complete package. It is so disappointing.”

They do have a colt on the ground by him and another on the way, so fingers are crossed they’ll inherit those very special traits that made him such a standout in New Zealand’s jumping circles.

The family are hugely grateful for all the wonderful support they have had from the wider equestrian community – from photos to flowers, messages and lots of cards. It has meant so much to them all. Eros K has been laid to rest at Josh Barker’s property in Cambridge and the Whittaker family are planning a special trip north to plant a tree and set a plaque in memory of their special stallion.