CHANGE THE REIN TAKING IT UP A NOTCH Equestrian Sport New Zealand’s Change the Rein campaign is really turning heads with the New Zealand Pony Club Association announcing this week it will join the campaign as a key partner driving the messages further into the equestrian community.

Change the Rein is a campaign designed to advocate for a caring, supportive and positive culture in equestrian sport in New Zealand. It is currently being rolled out across the country with more than 100 message boards already sent to events to use and GameChangers awards for people who exhibit the values of the campaign – kindness, support, horse care, gratitude and integrity.

“We are so excited to have NZPCA as our first partner in the Change the Rein campaign that rewards great behaviour and advocates for a supportive and pleasant equestrian community. The messages are designed specifically for equestrian sport and have already piqued international interest,” says Dana.

NZPCA CEO Samantha Jones says the NZPCA is delighted to be joining the Change the Rein campaign. “We all have a role to play in making equestrian sports a fun and friendly place for everyone to enjoy. The simple but powerful messages in Change the Rein will help us all to remember to be kind to one another and to recognise, in ourselves and others, positive values and actions that really make a difference to our day.”

Change the Rein is a technical riding term that means change direction. It became the catchphrase of the campaign due to its reference to a conscious change, in this case relating to behaviour. It has taken off, resonated well with stakeholders and taken on a life of its own.

“We have received so much incredible feedback about this campaign from other countries, you get the feeling it is working when others start quoting its philosophy back to you. WE have had interest from other equestrian federations and lots of individuals – we are so excited to see it expand,” says Dana.

The campaign was developed following behavioural issues ESNZ wanted to deal with and subsequent research that identified people were apprehensive about joining a sport they perceived as complex and a bit scary.

CTR is a three-stage campaign – “Rein It In” was stage one which was about stopping unwanted behavioural issues and societal problems from polarising people’s views of equestrian sport. This saw ESNZ begin some of the first ever amateur sport testing for drugs and alcohol at events, conduct member research on issues and perceptions and redo its entire judicial system.

Stage two is “Tighten the Reins” – development of key messages, programmes and resources to support the campaign’s key messaging, roll out of the message boards and reward and recognition programmes. This has already resulted in a different feeling at events, positive and supportive behaviours. People who don’t behave in a way consistent with the messaging are being challenged in a constructive way.

Stage three is “Loosen the Reins” – this will be when we are all happy and we can see that everyone naturally behaves in a positive and supportive way.

ESNZ and the NZPCA are excited about the possibility that the campaign can be used by many other equestrian related organisations and are happy to build it with more partners nationally and globally. 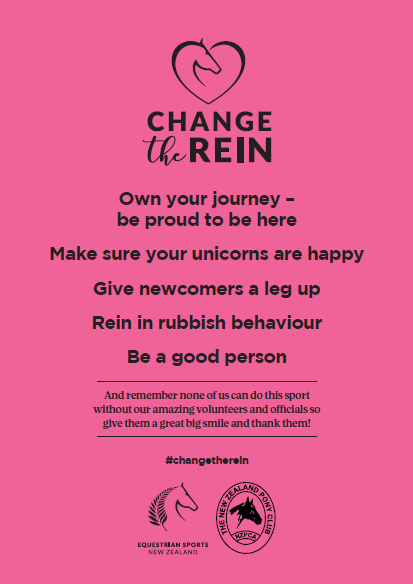