End of an Era for Val 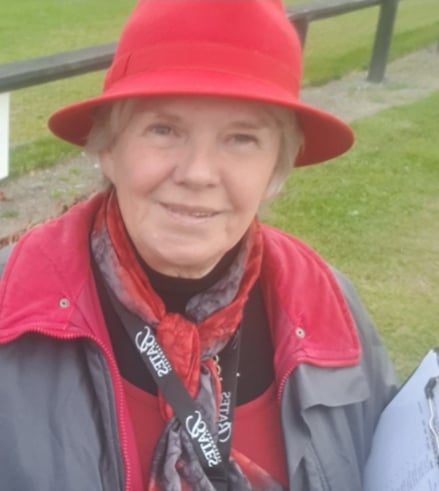 One of the country’s valued FEI Eventing judges, Val McGregor, from the deep south, Riversdale near Gore to be precise, retires from duty this year. She is much travelled, there being very few FEI events in the South Island, with most in the Canterbury area.

Val and her husband Colin both rode, Colin and his brother being “a force to be reckoned with” competing five A grade ponies. Val herself rode dressage, not competing north of Dunedin very often due to the cost of travel from the Waimea Valley, where they farmed. She produced a horse to medium, the highest level at that time, which was sold and subsequently won the DC Trophy.

So no surprise their daughter evented until she went to university, Val saying, “She rode and I judged.” As a result she was involved with the local pony club, and is now a life member of the Northern Southland area. “You do everything in Southland,” Val says, so she and Colin are both involved with the Gore A&P as well.

When the legendary Joan McCall “bull dozed” her into becoming an eventing official Val never imagined where it would take her. She was mentored by Margaret Dickie and Alan Bear before attending her first FEI seminars at Taupo in 2001 and 2003, conducted by Peter Herrick.

This was followed by the opportunity to attend a seminar at Hartpury in the UK, in 2006, where Jennifer Miller was officiating.  According to Val the judges were very disappointed to spend two days devoted to dressage and not get out onto the cross-country on day two.

However it was the forerunner to judging opportunities across the Tasman, including six times at Warwick in Queensland, three of them World Cup Qualifiers. One of these, with Margaret Dickie also judging, was in 2007 when the Equine Influenza outbreak took hold. All 200 odd competitors were quarantined for 42 days, with the army surrounding the grounds before anyone could leave.

Val also judged twice at Naracoorte, SA, at Albury, NSW, and at Lakes & Craters, VIC. She names former AUS international rider, now judge, Brian Schrapel, as a valued mentor. But nothing prepares you for the extremes of bush fire heat when you live at the bottom of the mainland.

At Lakes & Craters it was forecast to be 44 degrees on cross-country day. The Veterinary Delegate requested the start be brought forward to 7am, and the riders were instructed how to care for their horses, with Megan Jones and her grooms demonstrating aggressive cooling techniques the night before.1800 bags of ice were brought in to cope with the 350 horses.

On the day the crater was full of smoke from nearby bush fires, and all generators had to be put inside the trucks. The senior riders and their grooms turned out to help the lower levels, who ran first, and amazingly all 350 horses completed, with only two requiring attention from the vets. All trotted up next day.

Val said, “It was an exceptional experience. I got so hot I was about to collapse so sat in the ice truck for fifteen minutes!” McLeans Island, Taupo, and Puhinui are tame after that kind of drama, but Val is sorry to retire. She said, “I have enjoyed my time so much. I met such marvellous people.”

At 72 she is still fit and well, but concedes things get harder as you get older. “This Covid thing has finished the sport for now, but I was about to stop judging anyway.” Thank you for your contribution to the sport, Val. You can just enjoy being a spectator now, with no responsibilities.