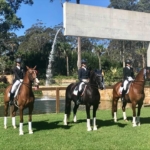 First up at number two was Victoria Wall and the elegant Letty Lei who scored 69.125% for eighth place – this was close to her personal best of 69.98% but none the less a great score and a relief for Victoria that Lulu was feeling much better in the contact than in the Grand Prix and happier in her work.

Next of the NZL combinations was Wendi Williamson and Don Amour MH. Wendi has shown enormous resilience on the tour and been described as a fabulous role model by young team mate Melissa Galloway. A much improved performance assisted by Wendi’s skillful riding produced 69.22% and they held onto 6th place

Melissa Galloway came in at number 7 and rode it like they stole it for a 75.565%,  a personal best and second place !  She described the feeling from Joey as simply unreal – it was like a dream.  “I  didn’t have to think too much about what was happening. I could just enjoy it. In fact the biggest decision I had to make was before the test.. to wear the ears or not wear the ears…. I decided not to – I thought the noise might lift him a little after two days of competition. When I came out of the ring Mum just threw the  ears in the air. It was quite emotional and we are all so proud. The whole team is felling so supported by everyone back home – thank you”

John Thompson and the eight year old Chemistry drew nine. You could be forgiven if you thought this horse had been competing Grand Prix for two years or more – not just two short two months. His score of 75.025% put him into third place. “I was just so so proud of Tommy that when I came out of the arena I really didn’t care what the score or the placing might be. He gave me that very rare feeling of giving me more than he’s actually been trained to do.  You know when I first started in Grand Prix, I had to contend with Julie & Steiny, then it was Wendi & DJ, and now it’s Melissa & Joey”!

The livestream made for nail-biting viewing as the relative places of the NZL riders moved up and down and then it was truly game on when Mary Hanna and the Johnson mare Calanta entered the arena. Amazing music, so harmonious and great pi pa tour. A mistake in the one tempis saw them slip to 3rd but Mary nailed them again in the joker line and finished with what seemed like a never ending lesson in elegance up the centre line. A deserved winner on 76.205% and a new Australian record – pushed hard by a couple of young kiwis just beginning their international careers.

Holly Leach and HP Fresco completed their small tour campaign at event 1 in great form scoring a close second in the Int I Freestyle on 71.375% having to concede to local NSW rider Mary warren and Mindarah Park Ramirus on 72.15%

But a side note – The Australasian record of 76.3% is still held by Julie Brougham and Vom Feinsten. Will it still be intact next Saturday – watch this space

Full results can be found at https://results.equestrian-hub.com/show/300

Acceptance list for Event 2 https://willingapark.com.au/wp-content/uploads/2020/01/Copy-of-2020-WPCDI-Accepance-list_Event-2.pdf   This list could be updated nearer to the start of the event on Thursday