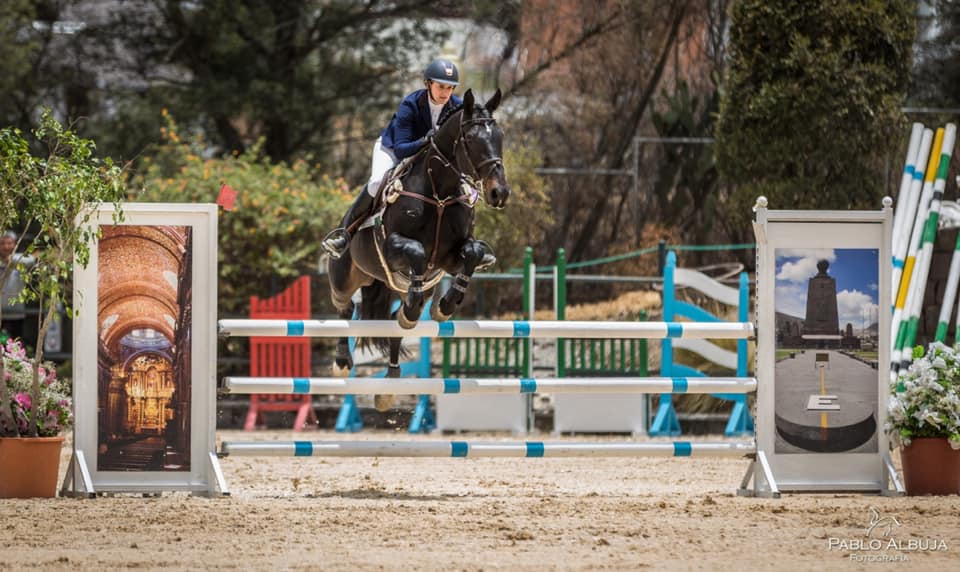 “I did a clear in the first round and then I was telling myself in the second round “you have to concentrate!” When I’m in the ring I’m in my zone, I don’t even remember what happens, I just ride!”

The FEI Jumping World Challenge Final was created in 2001 under the sponsorship of PSI, and was organised together with Dressage for five years at the Kasselman Stables in Hagen, Germany. It then moved to Santiago de Chile in South America in 2008 and 2009 before changing continents again when held at Kyalami Equestrian Park in South Africa in 2014. It visited Central Asia for the first time last year when Israel’s Nadav Sternbach came out on top in Tashkent, Uzbekistan, and the 2019 edition at Quito was the 18th in the popular series.

The FEI Solidarity Department oversees the running of this developmental competition which provides less experienced athletes from remote countries with the opportunity to compete internationally. A total of 21 riders from 16 nations flew the flags of Algeria, Bermuda, Chile, Costa Rica, Dominican Republic, Ecuador, Democratic Republic of Congo, Guatamala, India, Indonesia, Israel, Morocco, Panama, Republic of South Africa and Zimbabwe in a week of great sport and camaraderie that began with last Wednesday’s Welcome Stakes.

Chile dominated this opening test when Ignacia Munoz galloped into pole position ahead of compatriot Nicolas Fuentes, while Algeria’s Lena Boutekedjiret lined up in third and Costa Rica’s Diego Loria finished fourth. One of the biggest challenges faced by all the competitors is that they must ride borrowed horses, and the Ecuadorian NF secured a choice of 27 mounts, 19 of which were generously provided by the Ecuadorian Police service (Policia Nacional de Ecuador).

Riders were only paired with their horses the previous day when they were allowed a 30-minute warm-up before a 15-minute familiarisation period in the main arena during which they were permitted to jump a few fences. And it seemed that Morocco’s Sami Cherkaoui had found his perfect partner in the eight-year-old Argentinian gelding Quinchan with which he won Thursday’s First Qualifier. It was a convincing victory when they were the only pair to finish the course clear and inside the time, but the 18-year-old rider was eliminated in Saturday’s second qualifier won by Ecuador’s Agustin Baca.

As all the best athletes know, life-lessons are part and parcel of every day in equestrian sport, and Baca also had a major disappointment when his horse had to be withdrawn from Sunday’s medal decider. He was however permitted to compete in the Farewell class in which he finished third with his replacement ride, UIDE Bischochuelo, behind Chile’s Fuentes and Feroz in second, while Morocco’s Cherkaoui and Quinchan put their partnership right back together again to win it with the only clear round.

The top ten went though to the Final proper in which everyone started from scratch and competed in reverse order of merit from their standings after the first two qualifiers. In the first round only Ieromazzo, Morrison and Lucas Dieudonne from the Democratic Republic of Congo went clear over another testing track set by Ecuadorian course designer Jaime Morillo.

Cornege, Zimbabwe’s Judy Riddle (Tambo Othar) and South Africa’s Victoria Lavelle (Chaman) however were close behind with just four apiece. Lavelle added four more second time out but Riddle piled on the pressure when foot-perfect in a time of 82.65. Her advantage was cut short when 36-year-old Cornege and the 10-year-old Palugo were also clear but two seconds quicker, and when Dieudonne was eliminated for taking the wrong course with the lovely skewbald Pontiac, only Morrison and Ieromazzo stood between the Kiwi rider and the coveted gold medal.

It drew ever closer when 17-year-old Morrison and the 10-year-old Waldo left a fence on the floor in 81.94 seconds, but, last into the arena, Ieromazzo had victory in her sights and wasn’t about to let go. Although her horse, Magnus Jarea, was pulling hard and eager to run, she held her nerve to clinch gold with the only double-clear of the competition. With the quickest four faults Cornege slotted into silver while Morrison took the bronze and Riddle just missed out on the podium with her slower time.

The new champion was delighted with the performance of the police horse that carried her to victory, and was full of praise for the event organisers and the venue. Club Rancho San Francisco lies just 15 minutes from the centre of the Ecuadorian capital of Quito and has a majestic view of the active Cotopaxi volcano in the nearby Andes Mountains.

“It’s been amazing – the place, the horses, the organisation, the competitions, the people – we’ve all had a blast and this was a great experience!” Ieromazzo said.