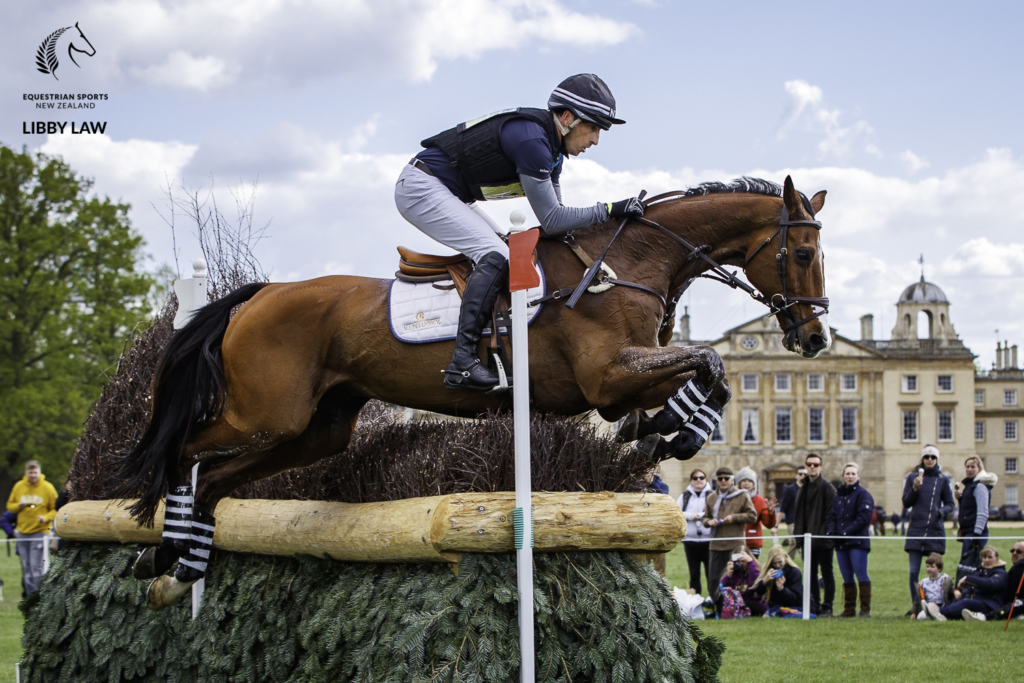 The Mitsubishi Motors Badminton Horse Trials leaderboard has gone from one dominated by the British, to one heavily tilted to the Antipodeans after a tricky and challenging cross country overnight.

Oliver Townend (GBR) is still at the front, albeit on his second horse Ballaghmor Class, but now six of the top 10 slots below to New Zealand and Australian riders. Andrew Nicholson and Swallow Springs were all class en route to a clear and inside time effort to move from 10th to fourth place, with Tim Price and Ringwood Sky Boy also still on their dressage score of 30.1 in sixth place.

But the toast of the day has to go to Virginia Thompson and Star Nouveau who stormed their way up the leaderboard from 57th to eighth spot. Jesse Campbell and Cleveland were clear but picked up time penalties to finish the day in 15th.

Of the 78 runners today, 47 were clear but just five of those were inside time – Andrew, Tim and Virginia being three of them. Chris Burton (Aus) brought home both his horses clear and inside time today to sit in third on Graf Liberty and fifth on Cooley Lands.

Andrew, who came home a second under time, was very pleased. “He’s a very good galloper,” he said of the striking grey. “He has a good engine and doesn’t pull but he can be a little clever in a way. You think he is going at top speed and then he will shy at something, so you give him a kick and he is like a turbo charge. He paces himself which is a good thing on these long courses.”

Virginia was ecstatic with her mare. “It was a dream really,” she said. “She just jumped mega the whole way round. She kept answering all the questions and she went fast. I kept kicking and she kept moving up a gear. She was just brilliant.”

There will be plenty of TLC in their stable overnight to ensure the horse comes out fresh for the all-important showjumping. “She will be tired. She can have a few rails (in the showjumping) but we will do everything we can.”

Jesse was pleased to get the cross country behind him. He and Cleveland had a 15 point penalty removed and the rider said he couldn’t be happier with their efforts. “I am just delighted. The horse has had a bit of a checkered cross country career but today he really fought for me. There were so many fences out there that were just so unpredictable, but he stuck with me and did the job.”

EquiRatings have been busy crunching the numbers and say that of the 235 combinations to have jumped cross country designer Eric Winter’s Badminton tracks, just seven have gone clear and made time. Today, 15 retired on course including Tim Price aboard Bango and Sir Mark Todd on NZB Campino. There were just four eliminations. The end result saw a very happy Eric Winter. “It’s not often I say at the end of the day that I’d not change anything about the course, but it was the case today. It showed off the best to be the best and showed everyone else what they had to work on.”

So now, it all comes down to the showjumping where Oliver Townend is in pole position on 21.5 penalty points. If he stays on that score he will claim another slice of history and overtake the best-ever Badminton score posted by Michael Jung in 2016. But there is nothing in it – Oliver has a rail and a bit in hand over the second-placed Piggy French (GBR) on Vanir Kamira who is 5.3 penalty points behind on 26.8. Chris Burton and Graf Liberty are right on their tail on 27.7, with Andrew on Swallow Springs another smidgen back on 28.1 and Tim Price on Ringwood Sky Boy on 30.1, and Oliver aboard his dressage leader Cillnabradden Evo on 32.1.

The second horse inspection will start at 8.30am (UK time) followed two-and-a-half hours later by the first of the showjumpers.