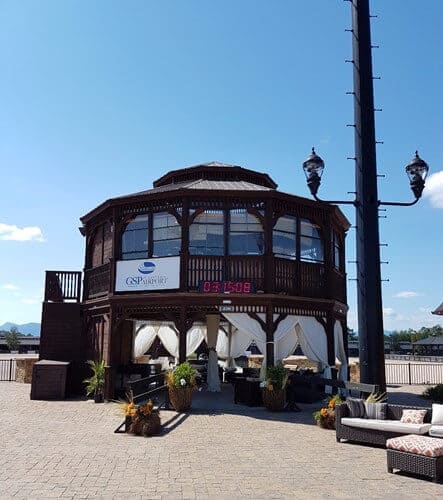 There is a huge amount of work being done in Tryon, North Carolina as the team prepare for the 2018 FEI World Equestrian Games.

ESNZ had a small delegation visit Tryon in September, and they have come home most impressed. High performance director Sarah Dalziell-Clout says there is no doubt, the Tryon games will be an incredible one-stop shop for all disciplines.

“We were warmly welcomed and hosted during our stay, despite the mayhem being caused by Hurricane Irma and the incoming evacuees – horses, dogs and people – from Florida,” she said.   “Both Mark Bellissimo and Sharon Decker have an incredible vision for the facility and as we were told, the WEG has required that they simply need to accelerate that development.”

Bellissimo is the chief executive of the WEG organising committee, with Decker the chief operations officer of both the Tryon International Equestrian Centre and WEG.

The main arena, which will be used for evening showcase events as well as dressage and para-dressage, seats 8000 people. The current grass derby surface will become the main WEG arena for showjumping as well as the opening and closing ceremonies. An indoor arena for reining and vaulting is currently under construction. During its season, 520 staff are employed, and that will nearly double for WEG.

There are 1200 permanent stables on site, housed in seven barns. Horses will arrive on chartered flights into Spartanburg Airport and be trucked under police patrol the 45 minutes to TIEC where they will complete a 48-hour quarantine.

“Certainly, at first glance, there is still a significant amount of work to be done but we came away with an assured sense of confidence,” said Dalziell-Clout. “Given the facility as it currently stands was developed in just 16 months and has only been operational for three years, I am confident it will be done.”

However, she cautions accommodation for WEG will be limited and expensive, so encourages anyone keen on going to book early. Tickets for the games go on sale today (Monday, October 16).

The 12-day event is expected to be the largest equestrian event in North Carolina’s history and one of the biggest events on the global sporting calendar as it attracted more than 500,000 people. WEG was last in the United States in 2010 when the games were hosted in Kentucky. The 2018 games were meant to go to Canada, but switched to Tryon late last year.