For the NZ Dressage Championship

Mr Williams was the Director for the NZ Horse Society (now ESNZ) (1977-1984) who became NZ’s only Official International Judge (5*) for the FEI to date. He adjudicated Dressage at the Olympic Games and the World Championships.

The Medal is named after the German trainer, Felix Burkner, with whom he had trained in Europe.

The most successful combination to win the Burkner medal is Miss E.W. White riding Rigoletto. They won seven times. The closet rival on four wins is Kentucky ridden by Mrs M. Bayley. The Trotter Trophy for the Intermediate Level 8 National Champion Presented in 1986 by Mrs. A Stevenson of Invercargill.

The trophy was named after her daughter’s (Margaret Journeaux) beautiful chestnut horse “Surrey”. “Surrey” represented NZ at the Australian Dressage Championships and the Sydney Royal in 1987.

Mrs M. Bayley has won the trophy five times, she rode Rubicon to three titles and Kentucky to two. For the Level 6 National Dressage Champion For the Level 5 National Dressage Champion For the Level 4 National Dressage Champion

Presented in 1971 by Colonel Pieter Doornbos.

Pieter was an international dressage rider from Holland who settled in New Zealand in 1953. He also excelled in Show Jumping and many other sports such as fencing, tennis and swimming. For the Level 3 National Dressage Champion

In 1994 the trophy was awarded to joint winners, the only year in which an outright winner hasn’t been found. Mrs S. Clark on Squirrel Hill and Miss A. Raves riding Sir Patrick shared the honours. For the Level 2 National Dressage Champion

First presented in 1976 by Miss Airini Hutt of Ongaonga.

Killala was Miss Hutt’s wonderful white horse who was one of the first to show one time changes. He could do these for the length of the Hawkes Bay A & P oval and back without a mistake. 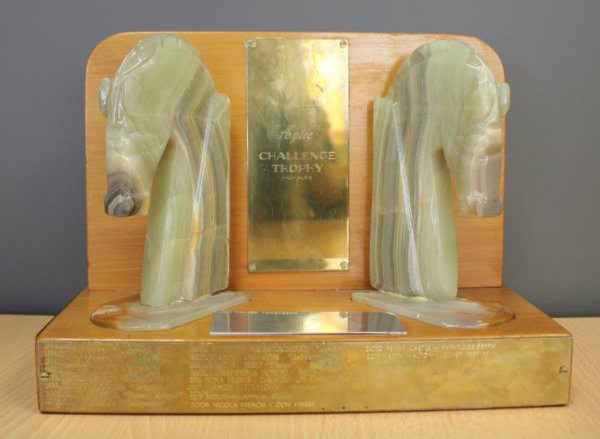 For the Level 1 National Dressage Champion

Aztec was a magic South Island horse who gave much to advanced dressage in NZ. He won the Burkner Medal in Gisborne in 1984. This trophy is named after Helen Holden wife of Mr Duncan Holden.

Helen rode the popular horse Bandmaster who was an ex steeplechaser with a difficult character but they were such a great team they demonstrated the Medium test for the first in NZ , and were the first combination in NZ to ride the FEI Prix St Georges test.

Helen’s horses Bayard and Bandmaster were the first notable Dressage horses in the country. Presented by Sue & Diana Fowler of the Astek Stud.

Astek Stud is based in Canterbury where they breed top quality versatile warmblood sport horses of excellent temperaments, conformation, movement, jumping ability and type, for both New Zealand and international equestrian markets. Mr Cholmondeley – Smith presented this trophy to recognise the contribution of sport horse breeding to the Olympic discipline of dressage. Patricia Dalrymple (nee Robson) represented the North Island in show jumping and continued on to be very involved in top level dressage judging and also breeding of hanoverians.

Katherin Gorringe is a well known dressage rider and trainer in New Zealand. She trained in Europe and competed in Rotterdam along with representing New Zealand in the Australia Champs in 1983 and winning the Open Medium class at HOY in 1995. Named after Mrs S Hyland, Shirley was chairman of Dressage New Zealand from 1982 until 1990. She was also a candidate international dressage judge.

Amanda McCutcheon has won the title three times. Twice on Lord Cavalier and once on Golden Girl.

KH Arvan won numerous national titles in the hands of Vanessa Way and then with young rider Molly Lumb. Pip gave Arvan a wonderful retirement home and the trophy is in memory of his courage, character and spirt during hie competition career.