It’s been a day to remember for New Zealand’s young rider eventing team who rode off with the Oceania Championship crown after a fiercely fought battle at the Zeep Melbourne International 3 Day Event, with team member Charlotte Penny also the individual winner in the CCI3*-L class.

The 19-year-old from Taupo took the victory aboard Festival, a 15.1hh horse she bought from her trainer Monica Spencer, who just happened to be the highest placed New Zealander in the senior Trans Tasman clash with a third place finish.

It was a very emotional day all round for both Charlotte and Monica, who also bred and produced the horse.

Charlotte and 10-year-old Sparky, as the mare is known at home, finished on their 30.4 penalty point dressage score. “It is a dream come true,” said Charlotte, who is studying economics and supply chain management at Waikato University, part time.

To cap it all off, it was a personal best score, and their first-ever 3*-L. “I wanted to finish on dressage score and post my best score for a 3* – it is just awesome to pull it off. I was nervous but calm going into the cross country, but I knew what I had to do out there.”

“Sparky has taught me everything I know. I had only done 95cm when I got her, and Monica has been amazing.”

As a child, Charlotte said she had dreamt of riding for her country . “It is really quite emotional.” The combination last year won the young rider one-day championships.

Charlotte was incredibly proud of her team too. “We have all gotten really close on this trip. We really are like a little family. Everyone stepped up and gave it their all.”

Both nations were down to three riders after the cross country with the sub 38 penalty point efforts from both Charlotte and Brittany Fowler giving the Kiwis the edge 139 to 157.5.

Brittany and Game Keeper finished in fourth place on 37.3 with Mackenzie Marlo and CHS Diplomat in 19th on 71.3.

Chef d’equipe Lizzie Green was thrilled with all their efforts. “It was a great end to the competition,” said Lizzie. “Charlotte was the ultimate professional and a very deserving winner. All the girls worked together as a team and I am very proud to have stood alongside them this week.”

Her words about Charlotte were reiterated by her own trainer Monica. “It has been such a special day for us,” said Monica. “We are a real team. I knew she could do it, but to pull it off is just so cool. I am so proud of her. She worked hard and everything went to plan. She has trained for this moment. We talk a lot about personal bests and that is what she was aiming for.”

Monica said the teen had been a true professional in each of the three tests. Sparky is one eighth Clydesdale and 7/8 thoroughbred. “It seems like just yesterday Sparky and Charlotte were cantering around at training horse trials and now they have won their first international event. It is a pretty quick rise,” she said. “She won the Young Rider championship in New Zealand and to now win here is just spectacular. She will be wearing a medal around her neck in no time.” Proud parents - Kellie and John Penny with Charlotte and Festival 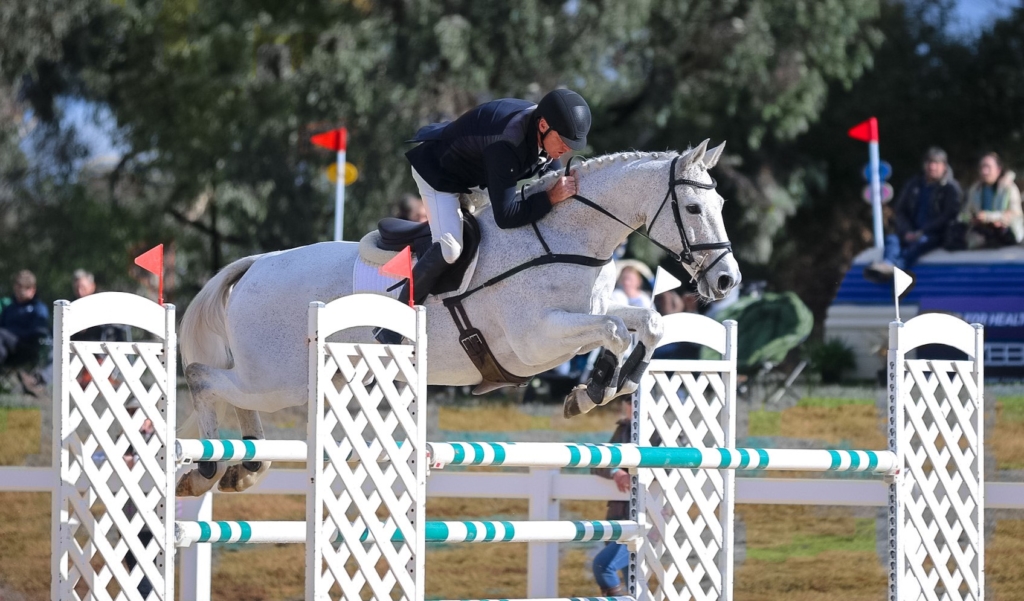 Monica was just as chuffed with the efforts of 10-year-old Artist in the CCI4*-L who she had started at the same time as Sparky. “It was a rocky road here,” she said. “Artist got a nasty rash from something when we arrived and we weren’t able to get on top of that. I rode my first dressage test with only my right leg on – that’s a first for me. He was hyper sensitive on his left side so it made navigating our way through the dressage that much harder.”

But the horse was so genuine and apart from a late change and a “dodgy” half pass, she says it wasn’t a bad test – although not quite what they had hoped for.

The cross country had been tough but Artist had been a “superstar”. They had been held on course and she worried about the time but she needn’t have. “He was a champ and galloped across the ground.”

They did two thirds of the course on just a single front shoe. “It really wasn’t all smooth sailing but I am so proud of him.”

It was Artist’s first overseas trip and he fittingly shared a crate with his buddy Sparky for the flight over.

Monica finished the event on 32 penalty points, with team mate Matthew Grayling and Trudeau in 10th on 42.7, Donna Edwards-Smith and DSE Mendoza in 17th on 50.9, and Christen Lane aboard her homebred Thundercat in 21st on 59.8. Shenae Lowings and Bold Venture won the class, leading from the dressage with their 25.3 penalty point score. The New Zealand team finished in third place behind the two Australian teams who scored 107.3 and 111.9 respectively, with the Kiwis on 125.6.

Chef d’equipe Blyth Tait was pleased with his charges. “They jumped four very impressive cross country rounds yesterday,” he said. “The horses were a tiny bit too bright in the jumping today which is an indication of how fit they are and how well they recovered. We didn’t win but it will be our turn again next year.”

He was full of praise for Monica. “She jumped a fantastic round today . . . it was one of the best I’ve seen from her,” he said. “She really held her nerve and it’s a credit to all the work  she has put in.”

Team manager Eliza Johns said the group had been fantastic to work with, making her job easy. “It is always an honour to support our New Zealand riders and coaches, and travel offshore with a team.”