So Much More to Come from Record-Breakers Gaylene Lennard is well used to winning but even she was speechless when she and Jax Johnson, at just their second FEI outing, broke the New Zealand record for the CDI3* Grand Prix Freestyle, claimed the highest-ever score for the class at the Sydney CDI, and also won the Grand Prix Special.

Their accomplishments have placed her firmly in the mix for the fast-approaching World Champs, which are being held in Denmark later this year and sent a signal to Australasia that this is a combination to watch.

Gaylene is better known for her prowess in showing circles. The Hall of Famer from Te Aroha has won the Horse of the Year Supreme Hack of the Year six times – five times on the trot – and the trans-Tasman Champion Hack at Werribee, Australia . . . both of which were impressive firsts. And those are only the tip of the iceberg.

After slaying it in the showing ring, she decided she needed another challenge and just over 10 years ago took up dressage. She bought Jax as a four-year-old. “I have just been bringing him slowly through the grades and while he has won at every level, it wasn’t always easy. He used to buck me off all the time.”

It became a matter of survival. “I stuck at it because I knew he was just so talented. It has been so worth it but amazing I didn’t break any bones along the way. He was never nasty; he would just dump me and stand there looking at me.”

The 12-year-old gelding has a lovely nature but given this was his first big trip away, Gaylene was worried for him. But he took everything in his stride. Gaylene slept in the barn with the horse the first night because he was so unsettled and headed to Bunnings the next morning to buy him mirrors for the stable wall. “It was a real turning point. He neighed out to them and just calmed down instantly.”

Days after their amazing achievement, Gaylene is still buzzing. “It is unbelievable really . . . just so cool. I am lost for words really. I never even imagined this would happen,” she said. “I thought we would come over and just see how we go. Now I am heading home with a whole lot of questions (about the World Champs).”

It was a last minute decision to go to the CDI3* and she had just three weeks to plan it. Getting a flight for the horse was easy but with it being school holidays and limited flights across the Tasman threw a spanner in the works. Thankfully, a cancellation saw it all systems go. “It was the best decision I ever made,” said the 59-year-old. “In my wildest dreams I never thought this would happen.”

But she is hard pressed when asked if the World Champs or Olympic Games were ever on her radar. She may be the ultimate competitor but either was always a really big step. “I am a one step at a time kind of girl. Before we went to Australia I was not even sure about how good we were. The first night (at Sydney) in the Grand Prix didn’t go so well. I was so disappointed but that only makes you stronger so I came out for the Grand Prix Special fighting and won it. Now everyone is saying I have to go to the World Champs but I just haven’t given it any thought.”

Their first CDI outing was at Taupo in March where they bagged their first qualifying score for World Champs. They’ve now got two. Gaylene says it is tough to know how good any horse is until you ride down that centre line. “For me too, it was important to see what the German judge gave me.”

She is talking about Katrina Wuest, an FEI 5* judge who happens to be a freestyle specialist and has judged at all the pinnacle events around the world. The 78% mark she gave Gaylene and Jax for their record-breaking test will not go unnoticed on the other side of the globe. “Jax is such an exciting horse and there is so much more to come from him. I always said this (trip) would be a learning curve and he was so good.”

While her trainer Vanessa Way didn’t make the trip across the Tasman with her, she was still with her every step of the way. “She warmed me up online by Zoom before every class. She is amazing,” said Gaylene. “She may not have been there in body but was still right there. I have trained with her since day one of my dressage journey.”

The New Zealand freestyle record Gaylene and Jax broke was previously held by the late Julie Brougham and Vom Feinsten. “That was very special too. It brings back so many memories of Julie and just what an incredible lady she was.”

The Sydney CDI record had stood for 18 years, and previously stood at 75.275% and set by Ricky Macmillan aboard Crisp. 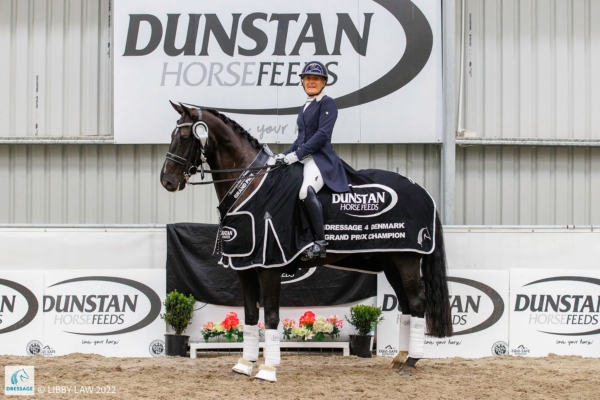 Gaylene said the support from home had been wonderful, and it was taking days to reply to the many messages that had flooded in. “It was phenomenal to receive them all.”

One who couldn’t be there but was possibly the proudest was her mum Betty, herself a former showjumper. She broke her hip the day Gaylene flew out but was home after a few days recovering from her operation. Betty, Gaylene, and her sister Dorothy live on the family dairy farm in Te Aroha.

They’ve all ridden forever. “I started when I was four with a sheepskin and surcingle aboard Bugs Bunny and haven’t really stopped.” Her late father bred racehorses and met Betty at a show. Dorothy is also hugely successful in the world of showing.

Dressage New Zealand sport manager Wendy Hamerton says it is an incredibly exciting time for the sport. “We are all just ecstatic about the Kiwi results at Sydney,” she said.
New Zealand now has three riders qualified for the World Champs with the possibility of one more. “We haven’t had a team at the Worlds since 1998, it is just tremendous that this is even a possibility.”

Melissa Galloway and Windermere J’Obei W were more than holding their own in very rich company in Europe with John Thompson and Chemistry, who won the Grand Prix at Sydney, and placed third in the Special, also firing in Australia. Both Windermere J’Obei W and Jax Johnson were bred by Rania Todd and David Woolley.