New Zealand’s eventers are primed and ready to tackle the world’s best at the rescheduled Tokyo Olympic Games in Japan.

World no.2 Tim Price, no.7 Jonelle Price and Jesse Campbell with alternate Bundy Philpott, are taking on 60 other combinations who are all chasing podium finishes.

The dressage test gets underway tomorrow, with the running order for New Zealand as Jonelle, Jesse and then Tim, over the two days. The Derek di Grazia-designed cross country course has already been shorted from 10 minutes to around eight minutes due to the expected heat, despite an early start. It’s the phase that attracts the most interest and is the one the Kiwi riders always hope will be as tough as possible.

They all agree it will certainly be a testing cross country with a time that will be tough to make. Tim Price, who will ride Vitali, says it is a big track with Derek using dimensions in very clever ways where combinations would need to “do something on landing after a very expressive jump”.

“It will call for both thinking and very reactive riding,” he said. “It is synonyms with di Grazia’s trademark design I think. Time is going to be really tight but it will make some amazing viewing and be like no other visual feast I imagine. It suits a good cross country nation like the Kiwis – we are looking forward to getting out there and getting stuck in.”

Jonelle Price, who rides Grovine de Reve, says it will take some skilled and courageous riding to come out on top of the field. “The track is beautifully presented on a unique site looking across the water and back to the city,” she said. Jesse Campbell, who will compete aboard Diachello, says the track is certainly looking awesome. “It is definitely fitting for an Olympic Games – the standard and specifications of it are good. I think it will give off a really good result while also showcasing our sport to the bet,” he said. “I think there will be problems evenly scattered and not one sort of combination pops out as being incredibly tough but they all need respecting. We can’t wait to get started. It will be about keeping your head on and doing a good job.”

Olympic chef d’equipe Graeme Thom welcomes the reduced time and says it will still be an “amazing test”. “The time is going to be very difficult to make and the course is a lot of back and forth,” he says. “There are a number of short, taxing sprints up hills that will be influential.” There are four waters which will also have a big part to play in the test. “Given that this is a 4*, even though there are a lot of 5* horses here, no one will be taking that course for granted. Derek (di Grazia) has a way of catching you out and everyone is prepared for that.

The organisers have done an incredible amount of work to mitigate the heat stress for the horses. The cooling tents are fantastic, as are the stables which are air conditioned.”
The horses will start shipping to the cross country venue on Saturday and will travel as a team. “Everything is top notch looking after the horses. Everything is looking great.”

The 65-strong eventing field is impressive. Back-to-back individual gold medallist Michael Jung (GER), the first rider to hold the European, Olympic and World Championship titles at the same time, will be chasing a hat-trick. It would be a brave person to call an outright winner in the teams with the British, Germans and Japan with the Australians always dangerous.

Twenty-nine countries will take part in the eventing, comprising 15 teams, 65 horse and rider combinations and 14 individuals. “We will just have to see how the competition opens up or closes up – we will just have to wait and see,” says Tim. A lot of earth has been moved to create the cross country venue, with mounds and rises added to flat areas and some of the steeper parts graded. It has been built on reclaimed land that was once a landfill, and subsequently been covered up to four feet. Subsoil and topsoil with sod has been laid for the Olympic Games. The venue will become a public park post Games.

The eventing dressage runs over Friday and Saturday, with Jonelle our at 9.52am (Japan time), Jesse at 7.20pm (Japan time) and Tim on Saturday at 10.38am (Japan time).
with the cross country on Sunday and jumping – both individual and team finals – on Monday. 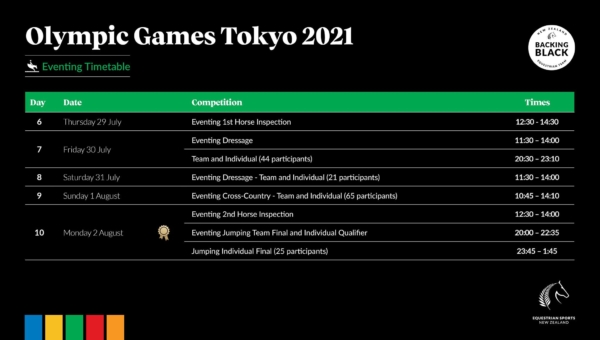