The superstars have been found across the age groups after another very successful National Young Horse Jumping Championships in Hastings this weekend.

The moment Bailey Marshall sat on Haupouri Evandro NZPH she knew she was onto something special. Today, at the 2020 Championships he delivered, taking out the Matthews Hanoverians Seven-Year-Old Championship Final ahead of a very competitive class.

The registered nurse from New Plymouth was ecstatic with Lou – as he is known at home. She only got him in August after a trip to Haupouri Sport Horses to try a number of horses – Lou wasn’t originally even on the list. However, the moment she sat on him, she says she immediately felt he was the right horse. “I just wanted something that would go out and jump nice rounds while also able to have a quiet hack around at home,” says Bailey. “He is even better than I thought he would be. He picked me really. I went to Haupouri to try a few others and Warwick (Hansen) said here’s another one.”

Bailey’s plan this weekend was to do the first round on the opening day of the three day event and take it from there. He was clear in the first, so they did the second where they picked up four faults and they were the only combination clear today in the final round.

“This is probably my biggest riding achievement. It was a really top class field with professional riders. I am just so proud of Lou going out there and being a superstar. I couldn’t fault him. He was tired today but still gave so much.”

Heloise Tolo (Wellington) and Heartline won the NZPH Style Prize for the class and were also second equal overall. Jaime took out the six-year-old championship aboard Corocat Xtreme and was second with Caspian Xtreme. She first sat on Corocat mid-winter and says she knew immediately the mare had talent. “She is really my type of horse. She has a lot of blood and while only small she is always on the go. You can turn her up to anything and is always super clear and gives her all.”

Four-year-old Calico Xtreme, on whom she won the style prize aboard and placed second in the championship, has only been broken in three months. “It proves how much you need the consistent training at home rather than just being out at shows.”

The courses had been good and while nothing was “super big” they were very technical with a lot of bending lines and plenty of questions asked of the riders. “You really had to keep your head about you.”

All three of Jaime’s horses had clear slates all champs with not a single rail down over the three days. “The young horses are certainly my passion.” 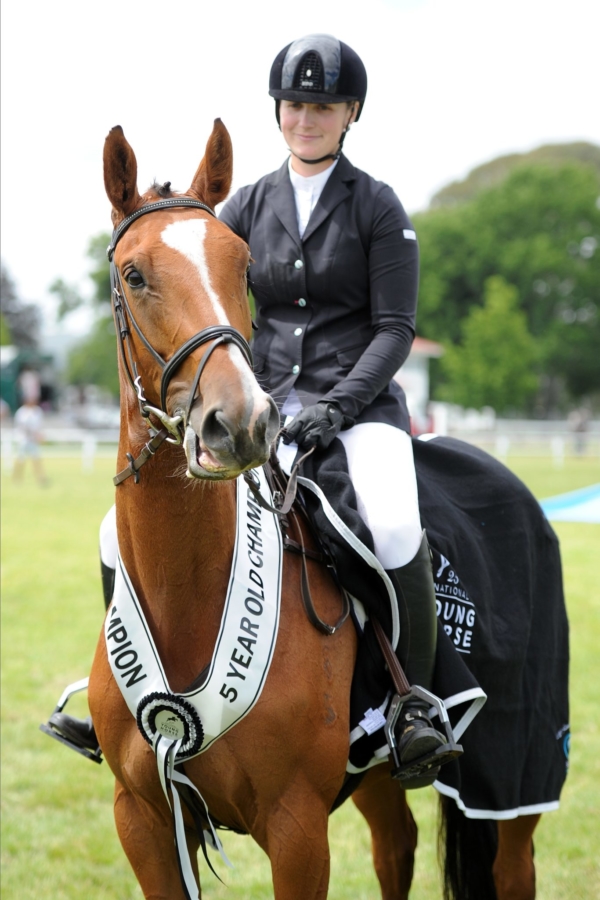 Melody Matheson (Havelock North) steered Cortaflex Giulia MH to victory in the East Coast Performance Horses Five-Year-Old Championship Final. The combination have been together a year-and-a-half or so but it was only in October that Giulia started to understand showjumping. “She just wasn’t quite sure of herself so I did some show hunter and I think that has been good for her,” says Melody. “She is a cool horse with quite a personality and just loves her food. She will self-load onto the truck when she is ready to go home.”

Three combinations came through to the jump-off today where Melody knew she had to put her foot down. “I didn’t realise quite how fast I was. For a little horse she has a big stride and a nice canter.”

Melody says the mare is one of the nicest young horses she has sat on. “She is small but feels she can jump a fence so we will see.”

Giulia is by Graf Top I who is also the sire of Melody’s top horse Cortaflex Graffiti MH – both were bred by Matthews Hanoverians.

Laura and Sentosa came out on top with their triple clear round effort in 38.74 seconds followed by Jaime and Calico Xtreme also all clean in 41.41 and Alexa stopping the clock at 43.93 aboard Corvette ECPH, leaving everything in place.

Laura, a mum, horse trainer and farm worker, was chuffed to win the champs aboard a horse she bred herself.

She won the service for Numero Uno Xtreme in a fundraising auction for the late Darryl Fraser from Waikanae, who was very involved with Pony Club in the Waikanae area.

Sentosa is out of Laura’s showjumper Gucci Girl. “I have loved him from day one,” says Laura. “He is a very spoilt horse. He is cheeky and lots of fun.”

She prepared him with the champs in mind. “He has a very clean record and doesn’t like touching rails.” Fittingly, he finished the champs with no faults against him.

The three day show is a real celebrations of the next generation of showjumping superstars and this year, for its 25th anniversary, attracted a record 510 horses.