Trio Honoured and Humbled by Award Peter Morris, who was unable to attend the AGA was presented with his Honorary Life Membership by fellow judges and friends, Fiona Bentley and Audrey Cameron. 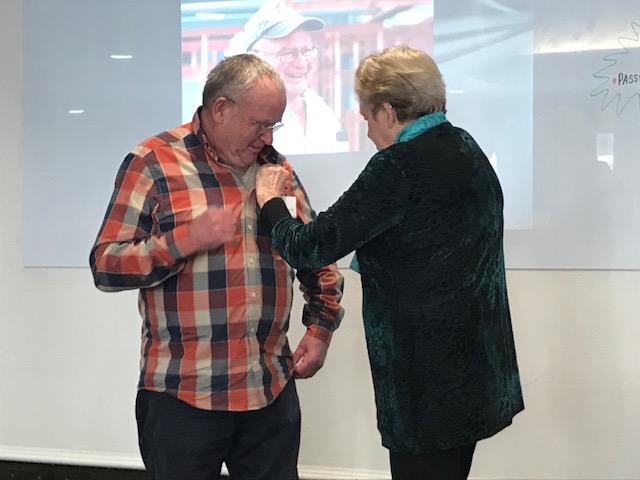 Three men who have in their own way each made huge impacts on the wider sport of equestrian have been awarded ESNZ honorary life memberships.

ESNZ president Richard Sunderland had high praise for each of them. “Wallie took the National Equestrian Centre at Taupo, shook it up and has driven the indoor training centre that is just so fantastic for our sport. People like him come along only once in every 50 years and he absolutely made that happen,” said Richard. “He just goes about things in his own quiet way, flying under the radar and gets things achieved.”

Richard described Peter as one of those who loved the sport and the people in it. “He is an incredible fella. I have never seen him ruffled. Even if he didn’t know the way out, he stood there and kept calm. He has shown us that you can be a great person in the sport without riding.”

And Sir Mark was simply the “ultimate” athlete. “He is quite incredible and such an inspiration to so many.”

The three men were all chuffed to receive the honour. In true form, Peter was humbled to receive it. “I never envisaged in my early twenties that I would spend 50 years in the sport,” he said. “During this time I have seen a lot of changes. I have had the opportunity to travel and made lifelong friends both within New Zealand and overseas.”

His career spans 50-plus years and he is regarded as one of New Zealand’s most knowledgeable and dedicated showjumping officials. In 1955 he was the first-ever winner of the Dorothy Campbell Cup at the Pony Club Champs. Peter was also the youngest to gain international FEI level 3 showjumping judge status. Over the years he has officiated at events in Australia, the UK, Canada and South Africa, with the highlight at Spruce Meadows (CAN) for the Queen Elizabeth Cup. Showjumping has always been his passion and for many years he served on the discipline’s committee, including a stint as chair.

Peter has received numerous accolades for his work in equestrian sport including being inducted into the Hall of Fame in 2017, made a member of the New Zealand Order of Merit for his services to equestrian in 2015 and was awarded ESNZ’s volunteer lifetime award, the Pilmer Plate, in 2014.

Wallie too said he felt very humbled to be awarded the life membership. “I guess anything that I have done has always been a part of a team,” he said. “Like the NEC building was something I did with (the late) Dave Grant, Derek Booth and Mark King . . . we did it together. Over the years when I have been away it has always been as a team, so to be singled out is hard.”

He wouldn’t change a thing from his lifetime involvement. “It has been fantastic.” It started when he was just a kid, going to Pony Club then right through to hunting. His only competitive time in the saddle was at gymkhanas but as an adult he has attended seven Olympic Games and seven World Champs as part of the New Zealand team. He was first selected as the team vet for the 1984 Olympic Games and since then has also been the chef de mission for equestrian at World Equestrian Games and Olympic Games. He has held positions at FEI level, including as a member of the veterinary committee and as a course director. In 2009 Wallie received the New Zealand Order of Merit.

Sir Mark Todd needs little introduction. His career – one unlikely to ever be emulated – spans decades and includes success at Olympic Games, World Champs, Badminton, Burghley and more. He is New Zealand’s most capped Olympian having been selected for nine and ridden at seven including two where he rode in both eventing and showjumping. His back-to-back individual gold medals with the mighty Charisma is etched in the minds of so many New Zealanders – “two for Todd and Todd for two”.

He has ridden for New Zealand at six World Equestrian Games, winning four medals including two team golds, and won nine CCI5*-L crowns including at Badminton in 2011 when he was the oldest to have done so. Sir Mark has won the Supreme Halberg Award, is a member of the New Zealand Sports Hall of Fame and voted FEI Rider of the 20th Century.

He retired from international competition this year to focus on his other equine love – racing. Sir Mark was honoured to have been awarded the life membership. “It is always a great honour and I appreciate it,” he said.

Honorary life membership awards are given in recognition and appreciation for outstanding service by a person for the benefit of ESNZ and the sport.