Eventing power couple Tim and Jonelle Price are fourth and eighth respectively in the in the Magic Millions British Open Championship CCI4*-S at the end of the dressage at Gatcombe Park in the UK.

World no.1 Tim and his 13-year-old British-bred gelding Xavier Faer sit on 26.2 penalty points in fourth equal and are the first non-British combination in the top five which is led by Izzy Taylor (GBR) aboard Monkeying Around on 23.3. 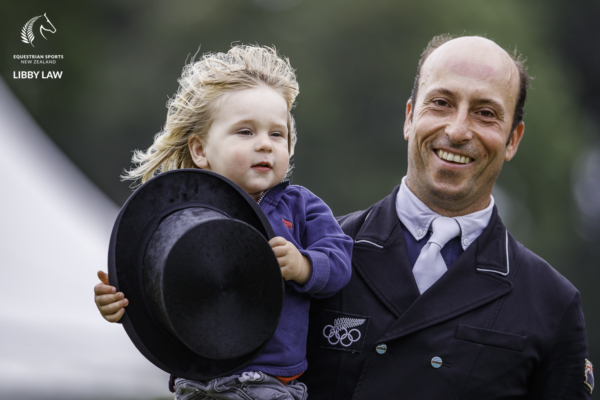 Tim was very pleased with the horse he rode to third at Kentucky in their last international outing. “He is a funny horse considering the experience he’s got behind him. Everything is always a bit of a surprise for him and he is really just coming back from his holiday after his first campaign from the first half of the year, so he is really good. He kept himself together – he wants to look at things and get distracted but he kept his composure and I was pleased with him.”

Tim says key to doing well at Gatcombe was three really solid phases and he was tipping wife Jonelle to be the one to beat. “There’s a tip – she has it written all over her. She is so fast and light across the country.”

The cross country course, designed by Captain Mark Phillips, was in your face and technically demanding. “We all know how fast you have to go to be competitive (here). It is what you expect and why we bring certain horses here. The ground is perfect and very well prepared.” Tim said the designer had made the questions difficult but ones that if you rode them well, you made it look easy. “Hopefully I am one of those guys.”

Jonelle was also very pleased with her 16-year-old black mare Classic Moet. The 2018 Badminton winners scored 27.6 to sit in eight equal place. “She is certainly more renowned for her cross country prowess than she is for her dressage but as she has gotten older, she perhaps is not quite as speedy as she used to be in the dressage,” said Jonelle. “These days I aim for a clear round and I think I achieved that today – I think that bodes well.” The combination had missed defending their Badminton crown in the spring so Jonelle was very happy to have the mare back out and thriving in the competitive arena. She was also very pleased there had been some good rain earlier in the week. “She likes a little give in the ground and it is just wonderful to have her here and she looks well and happy. I am really excited.”

Gatcombe was a key part of the build-up to Burghley for Tim and Jonelle. “Certainly the terrain here at Gatcombe is probably as good a preparation as you are going to find for Burghley.”

In the British Novice Championship Dan Jocelyn and Florencina R finished in 10th place on 38.8 penalty points. The title was won by Francis Whittington (GBR) aboard Brother Bertie on 30.2. Samantha Lissington and Kilmarnock Lad placed 10th in the Retrained Racehorse Championship with 48.4 penalty points. The class was won by Kristina Cook (GBR) aboard David Cricket on 28.5.