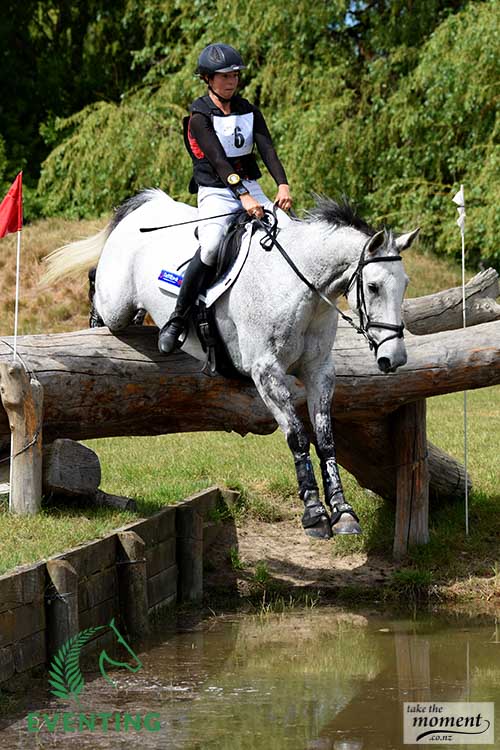 The rain which was forecast for the region over the weekend, but did not arrive, was a mixed blessing for the Dunstan Horsefeeds sponsored Arran Station Horse Trials, with a number of top riders electing to withdraw before Sunday’s cross-country at the Silver Fern Farms property at Takapau, due to the hard ground.

The Red Snap’r CIC3* class, the first North Island leg of the year long ESNZ Eventing Super League, was reduced to three combinations, with the overnight leader after dressage and showjumping, Samantha Felton, Matangi, winning on Ricker Ridge Rui despite amassing 25.2 time penalties across country, having pulled off a fence to approach it again after realising she was not on stride.

Sam had had a “real” fall from Ricker Ridge Riley in the 2* class, saying later, “I had a brain fade and saw a miss, which I don’t do very often these days, but he’s fine.” So she opted to play safe with Rui in the 3*, saying, “I changed my mind and circled to find a better spot, but he was perfect all the way. He’s not very experienced yet, he did his first 3* here last year, but he feels like a pro.”

Adelaide bound Young Rider Renee Faulkner, Papakura, was second on Rubinstar HH, having incurred 15.6 time penalties. She said afterwards, “We needed the run so I just cruised, and had a nice ride. We are ready for Adelaide now.” The winner of the Barbara Thomson Memorial Trophy for the best performed Young Rider in the Super League last year, Renee will be one of the youngest riders to contest a CCI4*.

Amanda Pottinger, Havelock North, and Bundy Philpott, Cambridge, started their Adelaide bound horses, Just Kidding and Tresca NZPH, in the 2* class, cruising slowly to give them a confidence boosting run before heading to Adelaide. However both were stopped on course due to a hold up after a fall, Amanda saying, “So much for a fitness blowout for us.”

Just Kidding has been a bit suspicious of jumping into water since his ducking en route to winning the NRM National Three-day Event at Taupo two years ago, but Amanda said, “He went well, so it was the green light that we needed today.” The horses fly out of Auckland on Sunday 11th November, sharing the expenses of trucking from Melbourne to Adelaide.

Matthew Grayling, New Plymouth, won the Oaklane Stables CIC2* class on Winky Foley’s NRM Trudeau, ahead of Amanda on Just Kidding, who was the overnight leader but did not push for time across country. Kelsey Leahy, Cambridge, wife of jumps jockey Finbarr Leahy, was third on the former Group 1 race horse Showcause, now making a successful transition to another career as an eventer.

The Caltex Westlow CIC1* was won by Jessica Woods on Kings Soleil, the only rider inside the time, ahead of Samantha Felton, the overnight leader on Ricker Ridge Sooty, with Ashleigh McKinstry third on Pioneer Techtonic Shuffle, and Greer Caddigan fourth on Mr Mancini.

Jock Paget, who won the FMG CNC105 class on Bing Bong, said, “There is no question the ground is hard, but lots of riders in New Zealand and Australia will be struggling to prepare their horses for Adelaide. We need a sponsor to provide an aerator which can treat the going at events. It would be a huge benefit for the sport.”

The first two legs of the year long Super:League were at South Island events, including the South Island Three-day Event at McLeans Island, which was won by Donna Edwards-Smith on DSE Cluny.