Kiwi Jumpers Notch Best-Ever Effort on Day One at Worlds It’s been a stellar start for New Zealand’s jumpers at the 2018 FEI World Equestrian Games in North Carolina where Daniel Meech, Sam McIntosh, Bruce Goodin and Sharn Wordley have had the most successful day ever for the Kiwis.

The speed class – where faults are converted to time – attracted 125 combinations from 49 nations. New Zealand finished in 15thof the 25 teams, on 13.03 penalties. Switzerland lead the pack on 2.64 with The Netherlands in second on 4.35 and Brazil third on 6.42. Just the best three scores of each team count towards the tally.

Today, Sam aboard Check In 2 and Daniel on Fine both notched clear rounds, with Bruce aboard Backatorps Danny V and Sharn on Casper each had an unlucky rail.

The class was won by London Olympic gold medallist Steve Guerdat (SUI) aboard Bianca who stopped the clock at 76.33 seconds to pocket the $US33,325 first prize.

New Zealand chef d’equipe Helena Stormanns was very happy with her charges. “All four horses are jumping well and the riders riding well. I feel in a very good position for tomorrow.”

Sam was rapt with her 15-year-old stallion. “He was really working with me and jumping out of his skin,” she said. “It got a bit hairy after the water because I had a really long stride there but he is a super water jumper so I just had to trust him and go with it and wrangle him back in after.”

This is the fourth WEG Sam has ridden at and she had plenty of good things to say about the Alan Wade (IRE) designed course. “It is built very well. It is not at all invasive to ride, you just need to be right on the mark where the course builder is asking you to be. It is not huge yet but I am sure it will be in a few days’ time. Then you will need to know your horse and be in the right place at the right time I think.”

Daniel, who was first out for the Kiwis, was very happy with his sometimes tricky mare. “It was fantastic – she was great,” he said, admitting he was relieved to put the first round behind him.

“I had a bit of a sticky start – that kind of surprised me.” The combination recovered and found their rhythm after the first double at fence three. “Then everything came up great. She is just unbelievable. I am so proud of her.”

Daniel said he had expected the course to be a little different. “I was expecting a speed class with galloping and turning back and inside turns, but it was more like a grand prix course with speed, so it was a real challenge and my horse is quite green at this level.”

The decision had been for he and Bruce to be the first two combinations out for New Zealand leaving Sam and Sharn to “bring home the little bit faster scores”. “Our job was to put in some solid clear rounds.”

Bruce was also pleased with the efforts of Backatorps Danny V who only joined his stable in April. “I thought he was fabulous and really tried his heart out.” He felt the course was a very fair one with a few decisions to be made by riders out there. “I didn’t give him the smoothest ride today so I was disappointed with myself but extra happy with my horse.”

Danny had given him a few “exciting” moments. “I think he started off well and then as things went on it got a little bit hectic and I wasn’t able to stay as smooth with him as what I would have liked. It meant I had to change my plan a couple of times – sometimes at the last minute which made it harder work for him.” Bruce would look to take every advantage with his usually careful jumper.

US-based Sharn felt he was unlucky their light rub of the rail had seen it fall. He is a big fan of Alan Wade’s courses and felt he had done a superb job for the opener. “He really asked the right questions and made it big enough and technical enough. He is my favourite course designer and I was happy to know he would be building here.”

But he knew the coming days would be far tougher. “A lot of horses jumped clear today so he is definitely going to build it to spec. That’s ok for us – I think all the New Zealand horses jumped well so I am excited for tomorrow.

“I feel good about it. The horse liked the ring and he was jumping great.”

It was an interesting dynamic for him to be at a ‘home’ games. “It is kind of strange – we just loaded up, drove four-and-a-half hours and we were here.” He has competed a lot at Tryon, and won 11 big classes here, but he said there was a distinctively different feel about it as a world championships.

Teams will carry their faults from today. A new draw will decide order of go for tomorrow’s competition, with just the top 10 teams going through to Friday. 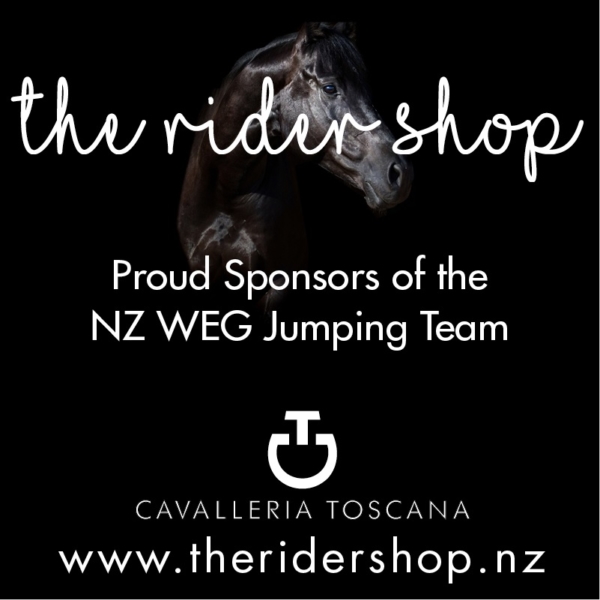