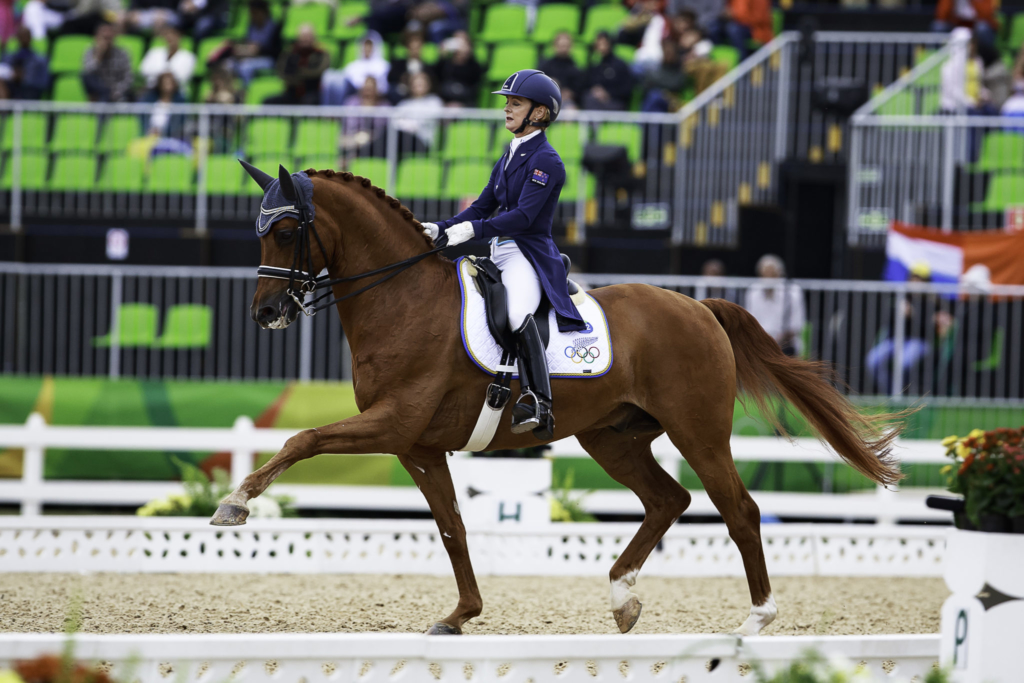 At a time when many are opting to take a slower road, New Zealand dressage representative Julie Brougham is pushing more boundaries.

The inspirational 64-year-old from Palmerston North was the oldest athlete across the entirety of the Rio Olympic Games and she’ll likely be the matriarch of the New Zealand team for WEG at Tryon.

But it hardly rates a mention with this very accomplished and determined mum of two. “I am not sure I am that unusual anymore,” she says with a chuckle. “Many people in all aspects of life today, whether it be in sport, music, politics or whatever, just keep on going and remain focused on learning and improving their skills.”

Julie and Steiny are now based and settled at Avalon Farm in North Salem, New York. As part of their build-up to WEG, Julie gave Steiny six weeks off after the Taupo CDI in April on the back of an “incredibly consistent season” that saw her fiery chestnut hardly put a hoof wrong in eight months of competition.

“I think to see that consistency shining through is a real highlight for me,” she said.

But it hasn’t been all plain sailing – Julie has had to make the very tough decision to retire her up-and-coming horse, Furst Fellini.

“He had a freak paddock accident in January just before his début at Grand Prix at the Wairarapa Championships. Subsequently we tried to restart him but it hasn’t been successful.”

The horse won the level 8 class at Equidays and had “a real talent” for piaffe and passage. “It is a really sad loss for us,” says Julie. “It means once WEG is out of the way, we will be on the lookout for another horse.”

Steiny was brought back into full work in June and while there were no competitions to be had before he flew out in mid-July, Julie is happy with their preparation.

A clinic with Ben Conn, who has spent the past five years in Germany, was a boost.

“Ben is an outstanding rider and coach and was my coach for seven years before Andrea (Raves). I was very keen to have some input from him; it was like having a little bit of Europe here with a much greater degree of intensity and urgency – it has to happen now, immediately!” She and Ben went through all of Steiny’s Grand Prix work, making little points on every movement. “It was extremely helpful.” Andrea was also there and Julie felt bringing the two together was of huge benefit.

She doesn’t like to say her goals for WEG out loud, but would dearly love to get to the second round, and she’s hoping for a favourable first round draw as an individual.

It’s here she pauses for a moment, before talking about the incredibly sad loss of Wendi Williamson’s Dejavu MH.

“We all felt the heart break for Wendi. It was an absolute tragedy. The horse hadn’t reached his full potential,” she says. “There is so much that goes into the make-up of a grand prix horse, and soundness, good health and courage are just three of them. DJ certainly had courage.

“I am so sorry Jon and Wendi won’t be there with us. I really did want us to be there as a team and think we would have all been very good together. I saw how professional the German team in particular was at Rio and I couldn’t think of better people to be in a team with than Wendi and Jon, and John and Holly.”

It continues to amaze Julie the following her showy chestnut garners.

The Horse of the Year Show may be her favourite, but it is the one that Steiny struggles with. “He gets a little bit hot there but I love it. All sorts of people come to watch at that show and I received emails and letters from people I didn’t even know saying how much they enjoyed seeing him there.”

The 2018 HOY didn’t quite produce the results Julie would have loved, it did see another mighty battle between Vom Feinsten and John Thompson’s JHT Antonello.

Her husband David will be with her from early August. He is such an integral part of the team, which comprises Steiny, Raves and the Broughams.

“I have the most wonderful husband,” says Julie. “He just says this is a once in a lifetime opportunity and if it means he has to work another year longer then so be it! I have sometimes wondered if I have used up most of my luck when I married him.”

The cost of the trip is enormous and she is hugely thankful for the support of Wendy Hamerton, Dressage NZ and all the people who have been involved in raising funds and supporting the two riders throughout. “Wendy has precise attention to detail and really has been on the team’s side right the way through.”

It has meant she can concentrate more on their preparation, training and goals. Steiny and Julie have cracked the 70% mark across the Grand Prix, Grand Prix Special and Freestyle to Music, holding the Australasian record for the Kur (freestyle to music) since 2015. There would be no better place for the Kiwi combo to notch another mark in their history-making trek.