“It’s an amazing opportunity to get different perspectives, to learn from and to exchange ideas with other experienced officials and vets from all around the world, in a spectacular place,” said Heidi. “It was always a dream of mine to do something like this.”

Heidi, from Blenheim, is currently a 3* qualified Endurance official and is one event away from becoming a 4* which she will do in the UK at Euston Park.

Heidi officiating at Euston Park is funded under the FEI Exchange Programme for Officials which is covering the cost of her international flights to the UK.

“The overseas opportunities have come from the amazing contacts I have met – both through my competing and officiating – resulting in personal invitations for me to attend events such as this. There will be around 500 to 600 riders competing at Euston Park so will be a whole different level for me.”

The second Euston Park event Heidi will officiate at is the H.H. Sheikh Mohammed Bin Rashid Al Maktoum UK Endurance Festival and entries from the Middle East and all across Europe are expected.

“We’ve used the FEI exchange programme in New Zealand to get officials from overseas to come here. It cuts costs, brings different perspectives and because New Zealand is small and we all know each other, having foreign officials means they are probably more impartial because they don’t know us.”

While Heidi is in the northern hemisphere she will also meet with the FEI in Switzerland about matters related to her ESNZ job including checking that we’re up to date on regulation and rule changes and that we are implementing best practice when it comes to drug free sport for humans and horses. She will no doubt sample the chocolate while she is there too!

Heidi has been riding for over 30 years and rides a part-bred 15 year-old Arabian mare called Rose. It was not until 2006 that she seriously took up Endurance competing and she started officiating at Endurance events after completing a national officials’ course within 18 months of starting competitions.

In 2014 she attained FEI level 1 after attending a course in New Zealand with Ian Williams, the FEI’s Director of Endurance at the time. She then met the criteria to graduate to 2* officiating and then 3*. All her 3* officiating at events have been overseas, in Australia mostly, and once in Japan. 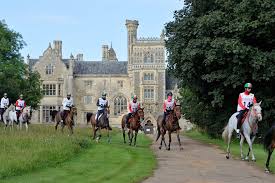