Julie Brougham and John Thompson have been named as New Zealand’s dressage representatives for the 2018 FEI World Equestrian Games in North Carolina where they will compete as individuals.

Manawatu-based Julie, who rode at the 2016 Rio Olympic Games, will compete aboard Vom Feinsten, her 15-year-old German-bred chestnut and owned by Julie and David Brougham.

The two have enjoyed much success in New Zealand, Australia and Europe. They are New Zealand’s highest dressage combination in the world rankings, with a competition CV that is largely in single digits. In 2016 they competed in CDI4* competitions in Aachen, Cappeln and Achleiten for five top seven finishes from six starts.

This year their nine CDI3* starts have brought three grand prix wins, two freestyle wins and one grand prix special victory – they were second in the remaining starts.

Julie and Vom Feinsten, who is by Fidermark, out of Wellcome (by Weltmeyer) also hold the Australasian freestyle to music record.

Julie is over the moon to be named. “Our build-up couldn’t have gone better,” she says. “We gave Vom Feinsten six weeks off after the Taupo CDI in April on the back of an incredibly consistent season.”

She says in eight months of competition, her fiery chestnut didn’t put a hoof wrong. “I think to see that consistency shining through is a real highlight for me,” she said. 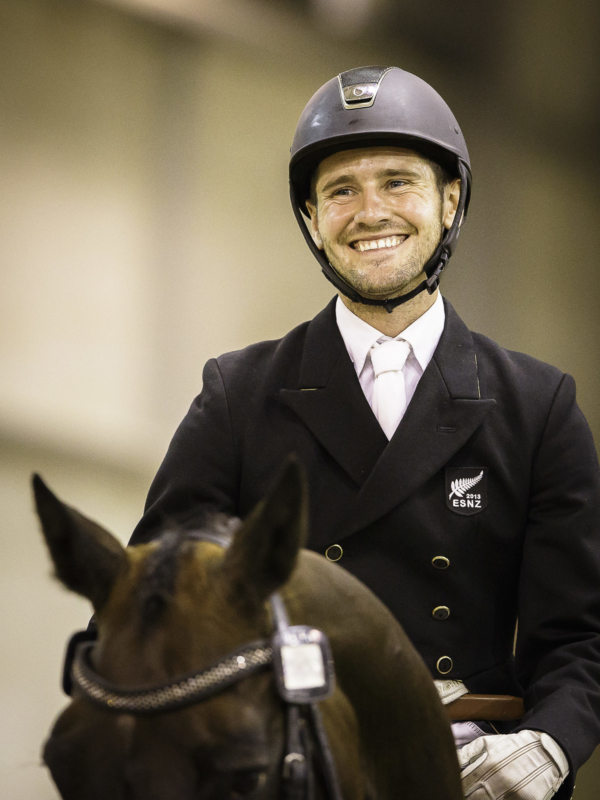 Hamilton-based John has been named aboard JHT Antonello, owned by John, the horse who competed at the 2012 London Olympic Games with Louisa Hill and with whom he was reserve for the Rio Games.

The 16-year-old Hanoverian gelding was bred by Hill’s sister Anna Simson and is by Anamour out of Flair (by Winnebago). Antonello and John teamed up in 2015 and quickly made their mark on the national scene, winning national crowns. They have been first or second in six of their seven starts this year.

John says he is incredibly proud of their selection. “I am ecstatic,” he said. “Words can’t explain that moment when you’ve been planning to do something your whole life and you all of a sudden realise you’re no long planning, you’re doing.”

It had taken him a while to bounce back from not making the Rio Olympics, but once he re-set his sights on WEG he was off again. He has huge respect for his sport and those behind it who were all working so hard to help the two riders raise the necessary funds for the trip.

“It makes me so proud and means even more to be putting on that silver fern. This is our sport. Selection and support like this gives so much more context to what we do.”

ESNZ dressage sport manager and WEG chef d’equipe Wendy Hamerton says both riders have been firmly committed to gaining selection for the champs.
“They’ve been great working towards WEG,” says Wendy, “and hugely committed to raising the necessary funds for the trip.”

Hamerton paid tribute to Wendi Williamson, who had also been campaigning for a spot on the team but tragically lost her top horse Dejavu MH to colic in April.

Vom Feinsten and JHT Antonello are now in New York preparing for a CDI3* and CDI-W at Saugerties mid-August.

This is the second announcement of riders for WEG – already named are Jenny Champion (Wairarapa) and Philip Graham (Canterbury) who will compete in the endurance. The showjumping and eventing representatives will be named next month.