Wylie Spot On With Spot Me 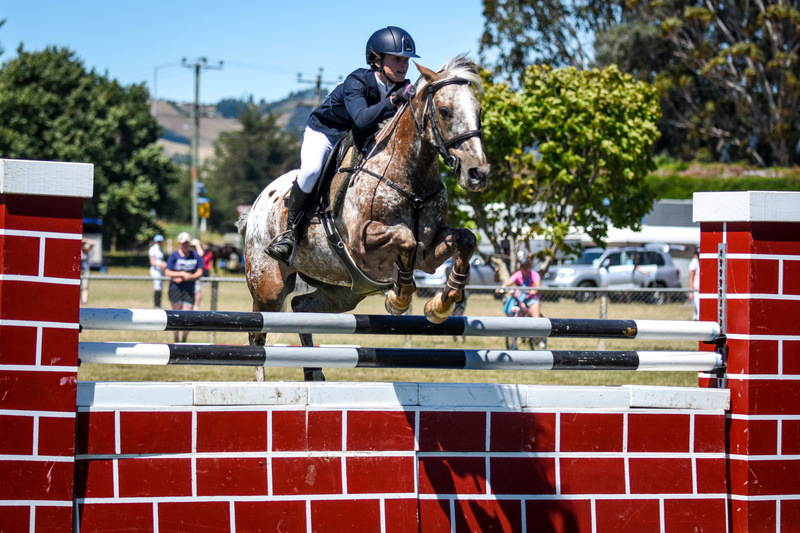 Jumping clear sealed the deal for many riders at the Otago Show Jumping and Show Hunter Champs 13-14 January.

The Eryn Duffy designed courses proved challenging for a number of combinations over the weekend, with clear rounds often claiming the win. The last fence fell frequently as horses tired in the strong heat.

One rider who managed to keep her cool was young Ella Wylie aboard MF Spot Me in the Country TV Pony Grand Prix. Wylie was the only clear in the first round and she was put in the pressure position of last in the second round. There was little room for error with the five four faulters jumping clear second rounds.

Wylie took her time and kept all the rails in place to gain her first win for the season at this level. Second and third were filled by Rosa Buist-Brown aboard Junior Disco and Grace Manera aborad Rednalhgih Cowan who were both caught out by the last rail in the first round.

The FMG Young Rider also produced just one clear round which came from Lucinda Askin and Portofino. This win displayed Askin’s skill as a rider and it’s no wonder why she has been selected for the New Zealand Young Rider team to compete against Australia later in the month. Grace Percy on Kiwi Spirit was the faster four faulter to finish second in front of Steffi Whittaker and Ngahiwi Cruise.

Rik van Miltenburg played the advantage of being positioned down the draw order in the Dunstan Horsefeeds & Equifibre Pro Am. He learnt from the mistakes of others and guided Truly Unique to the only clear round of the class to secure the win. Arabella Jarman and Pukatea Kokomo came close, just taking the dreaded last fence to settle for second.

It was a four horse, four fault jump off in the Dunstan Horsefeeds & Equifibre Junior Rider. Three were clear in the jump off, finishing almost within a second of each other. Olivia Harkerss and Astek Reformer came out on top in 34.01 seconds.

Buist-Brown and the speedy Prestige fell just short in 35.06 for second place, but she was followed even closer behind by Whittaker and Tribute OL finishing third in 35.08 seconds. Unfortunately Harkerss and Buist-Brown unexpectedly nominated the wrong horses, which left Whittaker with the valuable winning points to help her position on the series leaderboard.

The bogie last fence also caught out Harry Feast and Double J Bouncer, who were first to go in the Dunstan Horsefeeds & Equifibre Horse Grand Prix. However it didn’t end up being the end of the world when the rest of the class couldn’t better his score and only Tegan Fitzsimon and Double J Monarch could match him.

Therefore it became a Double J dual in the second round. Feast out first set an unreachable benchmark finishing clear in 48.78 seconds. Fitzsimon also jumped clear, but in a much slower time of 53.85 seconds to hand Feast another win in the series.