Long Trip Worth it for Nalder in Children’s Classic 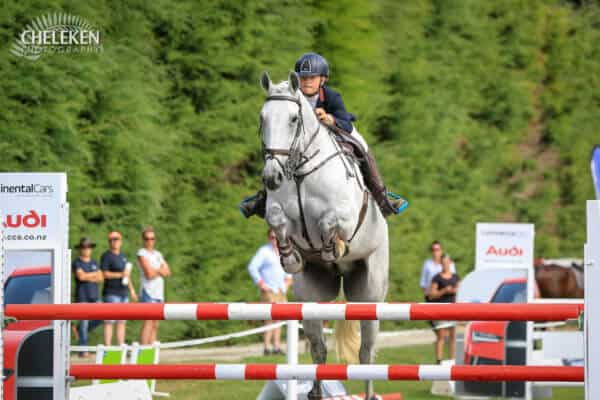 Anna Nalder may be well established in the show hunter ring but now she’s also staked a claim in showjumping with victory in the 2018 FEI Children’s International Classic at the Continental Cars Audi World Cup Festival at Woodhill Sands.

The 13-year-old from Cust and her lovely big grey Icebreaker II were the only combination of 12 to stay clear through all four rounds over the two days of competition.

Their efforts saw them win each day of competition along with the overall crown, giving Nalder a chance at making the world final later in the year.

But now it is showjumping all the way for the teen who lives on a small dairy farm in the South Island. She had originally planned to compete in the classic aboard her pony Mangakaraa Carbon Copy but with mum Pam Burns made the decision to try dad Mark’s hunter between Christmas and New Year.

It was a game changer. To be fair, 13-year-old Icebreaker is a real family horse, ridden on the hunting fields by Mark and in junior rider by older sister Tayler.

The Children’s Classic was certainly the biggest course Nalder has ever jumped. Burns said she felt Nalder could do well in the class.

“He is such an honest horse and a good clean jumper,” she said.

And it was a season goal for young Nalder.

“But it was funny going from Ben (Icebreaker) to (her pony) Carbon (Mangakaraa Carbon Copy),” she said.

Icebreaker was her nominated horse in the Classic, so she had to go first on him in the class.

“When I got on Carbon he felt like a miniature. I didn’t feel too much pressure out there though.”

She would love to keep riding the big grey but knows she’s probably third in line behind Mark and Tyler.

Icebreaker is a bit of a character at home. He can’t be left in a regular paddock as he jumps out when he gets bored so has ‘up-rigger’ fences.

“He is a great horse,” says Mark, who bought the horse to hunt when he started riding four years ago. “You can put anyone on him and he looks after them.”

Coming into the final day of competition, just four combinations were ‘live’ – Nalder, Readings, Narracci on Spirit of Liberty, and Burns.

In the end, Readings finished the four rounds with a total of four faults, Narracci in third on 12 faults and Burns in fourth on 14 faults.

Competitors in the Children’s Classic can ride either horses or ponies, and may compete in the year they turn 12 through to the end of the year they reach 14. New Zealand is the first of 14 nations across the globe to run the event – each jumping the same course. Riders accumulate penalties over the four rounds with global rankings will decide the top 16 who will travel to the world final.