NZ Jumpers in the Money over the Weekend 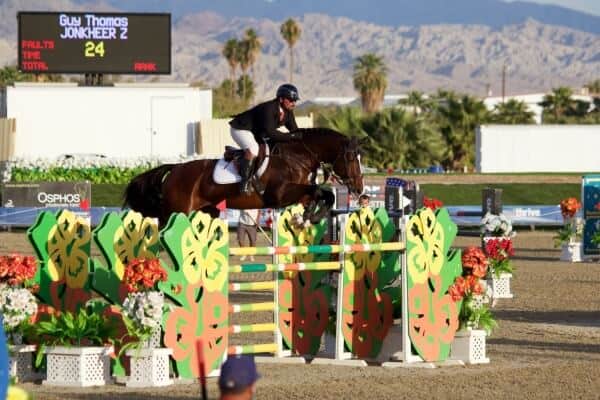 New Zealand’s international showjumpers have had a busy week, competing in events in the United States, Spain and Germany.

Samantha McIntosh and Lady Gaga 18 won the Gold 3 1.40m international class on the Mediterranean Equestrian Tour in Olivia, Spain. The Kiwi combination headed home 35 others to take it out in 56.05 seconds, comfortably ahead of the second-placed Matthew Sampson (GBR) aboard Renkum Centre Star who was also clear, but in 57.52 seconds.

Richard Gardner picked up a couple of placings at the CSI4* in Munchen, Germany. He and Calisto 5 were 12th in the 1.50m qualifier with a four fault round in 38.79 seconds. Max Kiihner (AUT) and Cielito Lindo 2 took out the class with a clear round in 37.06 seconds.

Gardner and Calisto were also just in the prize money with their clear round in 57.77 seconds in the 1.40m against the clock class to place 13th. Felix Habmann (GER) and SL Brazonado took the win in 51.07 seconds.

Daniel Meech also picked up prize money at the same event, placing 10th in the second 1.40m qualifier aboard Sitia-Blue. They were clear in 58.08 seconds, while the winner Emanuele Gaudiano (ITA) and Kaya van de Bosbeek were home in 52.52 seconds.

Guy Thomas found form at the CSI4* in Thermal, California. He and Jonkheer Z were second in the table A 1.50m class, which was won by Keri Potter (USA) on Bitalica. Thomas was also eighth in the 1.30m WildGold Jumper aboard Calida 68.

On the other side of the States, Sharn Wordley backed up his third in the World Cup class with a fourth aboard Caiman des Sequoias in the 1.50m table A, which was won by Elizabeth Madden (USA) on Breitling LS. She was clear in 50.03 seconds, with Wordley stopping the clock at 56.32 seconds.